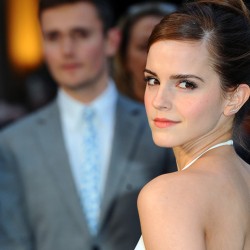 With feminism at the forefront, we’re flooded with support from many male stars showing their solidarity—especially for the beloved, equality-driven, intelligent, beautiful, and talented Brown alum Emma Watson. After she squashed the rumors about her and Prince Harry canoodling, I decided to take her dating matters into my own hands. Here are a few solid suggestions for eligible suitors that share her priorities and ideals.

Harry and Hermione? I mean, come on. Other than being one of the most attractive men on the planet (he’s 21, does that count as a man?), he was one of the first well-known hotties to publically support Emma’s #HeforShe campaign (swoon). The One Direction star has shown his loyalty to the fight for equality several times. He presented Emma with the British Style Award earlier this year. (He also literally whispered “He for She” in her ear as he handed her the award.) How could he not be #1 on the list?

We really just need to write his name as justification. But we will explain. The rumored-to-be newly single actor supported the portrayal of female sexuality and condemned the behavior of the media. Just think of it this way: Hey Girl, “It’s misogynistic in nature to try and control a woman’s sexual presentation of itself.” (Note: This is something he actually said.) Picture them reading, drinking tea, and having long thoughtful conversations about female impressionist painters.

I present you with the multi-talented actor and front man of 30 Seconds to Mars. Jared Leto showed his support on Instagram with “@emwatson is an inspiration for taking a stand and sparking a worthy debate. HeForShe.” In an interview at Cannes Lions after playing a transgender character in Dallas Buyers Club, Leto spoke of how his single mother taught him to appreciate women’s issues. He also enlightened the crowd about his personal experience with femininity: “I’ve worn the heels, I’ve put on the tights and everything else, so I feel your pain ladies.” Pro: He pulls off ombre better than any lady and she would definitely be able to share hair products with him.

British, supportive of feminism, and ungodly handsome with the most perfect jaw, Douglas Booth sported one of the “This is what a feminist looks like” tees in support of the ELLE UK campaign. He also tweeted, “I am a passionate supporter of gender equality. @EmWatson @HeforShe @UN_Women.”

Not only did Loki from The Avengers tweet a beautiful, handwritten #HeforSHE picture where his blue eyes are staring directly into our soul, but he said, “@EmWatson you are impeccable & extraordinary. I stand with you. I believe in gender equality. #heforshe.” He then took his support a step further by quoting Emma’s tear-jerkingly amazing UN Speech: “Both men & women should feel free to be sensitive. Both men & women should feel free to be strong.” He also looked like a modern day super man trying to bust out of his “This is what a feminist looks like” t-shirt. We approve.

Harry Potter co-star, who has grow up quite well if we do say so ourselves, showed his support for Emma’s campaign with a very thoughtful tweet: “So proud of @EmWatson. From the girl I grew up with to the inspirational woman she is today. I’m with you. #heforshe.” Perhaps they could incindio some old romance (note: I am aware that Neville and Hermione had no romantic involvement).

Now my dear Ms. Watson, feel free to choose from this list of fine young men. I think that any of these lads would make a great partner to accompany you on your future endeavors. I have no doubt that you’ll continue to run the world and become the next queen of England. Thank you for lighting a fire under this extremely important issue. All the love to you and the man behind the amazing woman.