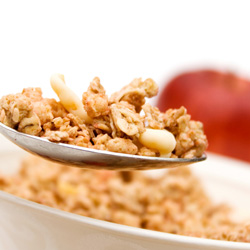 When it comes to cutting calories to lose weight, there’s the obvious big-picture fixes—like swapping your daily morning doughnut for a bowl of fiber-rich cereal. But we forget about the importance of also making smaller diet tweaks because we reason cutting back on a few calories at breakfast and a few more in the afternoon won’t do us as good as a diet overhaul.

But shaving a few calories from the foods you typically eat at the office can help you whittle down your waist without feeling deprived. After all, the basic rule of weight loss is if you cut calories, you’ll lose pounds. “If you cut 500 calories per day, you’d lose a pound per week,” says registered dietician Jodi Greebel. “That might be as easy as switching from a daily frappuccino in the afternoon to an iced coffee with skim milk.”

At Breakfast
Instead of: chowing down on a bagel with cream cheese
Try: spreading whipped cream cheese on a toasted English muffin (bonus points if it’s whole wheat)

Instead of: buying a full-fat yogurt and granola parfait at a nearby coffee shop
Try: making your own with low-fat yogurt, a small handful of granola, and antioxidant-rich blueberries

Instead of: heating up a packet of flavored oatmeal in the office microwave
Try: flavoring a packet of plain, unsweetened oatmeal with cinnamon and plump raisins

At Lunch
Instead of: ordering your sandwich on a hoagie-style sandwich roll
Try: substituting a whole-wheat pita

Instead of: overdoing it with a bulging wrap
Try: ordering a more reasonably sized open-face sandwich

Instead of: piling your salad with every ingredient at the corner deli’s salad bar
Try: filling your salad bowl with low-cal lettuce and veggies and selecting only one high-fat, calorie-dense item (avocado, nuts, cheese, etc.) per trip

For Snack
Instead of: digging into a bag of baked chips to fight through an afternoon slump
Try: snacking on a bag of freeze-dried fruit

Instead of: buying trail mix from the vending machine every afternoon
Try: making your own low-calorie version with 12 almonds, ¼ cup of raisins, and a small handful of sunflower seeds

Instead of: dipping pita chips in hummus every afternoon
Try: packing yourself crisp baby carrots and cucumbers for low-calorie dipping