When You Don’t Get the Job 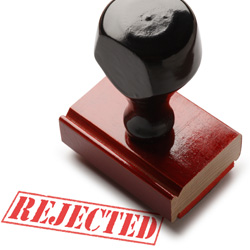 You met all the qualifications, you researched the hell out of the company, and you brought your A game to the interview… But they chose someone else for the job of your dreams.

Sometimes our career paths don’t take the turns we expect them to. It’s true, we can’t always get what we want when we want it (especially in today’s competitive job market). But often something equally as interesting and valuable is waiting for us in the meantime. Here, some insights on how to recover from the one that got away.

Send a thank-you note. Yes, it’s probably the last thing you feel like doing, but a little graciousness can go a long way. Soon after you’ve been rejected, send a note to your interviewer thanking them for their consideration and asking them to keep you in mind for future openings. If and when a position becomes available, your thoughtfulness might be enough to put you back in the running.

Find out why. There’s no shame in calling the HR manager to ask why they chose her over you. The answer can help you determine whether you need to sharpen your interview skills, garner more experience in a certain area, or learn how to slant a negative attribute in a more favorable way. Also, showing a willingness to improve indicates that by the time a new position opens up, you could be the right one for the job.

Keep in touch. If you’re really not willing to let the job go, take advantage of your new “in.” Assuming you had an interview, you probably met several people within the company—the HR manager, a sampling of the employees, the secretary… If you seemed to click with any of them in particular, ask if they’d be willing to meet you for coffee so you can gain more insight into their industry. As you pick their brain, you’ll get details about how the company functions and what they value most. (Or, they just might let you in on all of the employer’s dirty little secrets, and you’ll thank your lucky stars you got placed in the “no” pile.)

Think “blessing in disguise.” So plan A fell through. Now it’s on to plan B—the plan of empowerment. Instead of feeling the pressure to make everything fall into place, you can take some time to consider all your options. You can make more educated and strategic decisions as you prepare for your next move. Also, keep in mind that if the interviewer didn’t think you were the right match, they were most likely right—in which case, you’ve been saved from unforeseen struggles you would have faced had they given you the position anyway. Consider this an exercise for your rejection muscle.

Figure out why you wanted the job so badly. Maybe it was the prospect of getting in at the ground level of a start-up, or the responsibility of managing a large team. Or maybe it was simply the bragging rights that came with the new title. Whatever enticed you about the position can probably be found elsewhere if you’re willing to compromise in other less meaningful areas.

Ask for help. Why is it that you can tell your friends you haven’t had sex in three months, but you’re embarrassed to admit you’re having trouble finding a job? It’s called the “got-it-all-together disease,” and it makes us afraid to admit we don’t have all the answers, or access to all the resources we need. Let friends know to keep an eye out and ask them to pass along your résumé.

Remember that “no” could just mean “not now.” Okay, so the means to the end might have to change. But you don’t have to—nor should you—give up the ultimate vision you have for your career. You can have it all, so long as the word no doesn’t discourage you from trying again when the time is right.