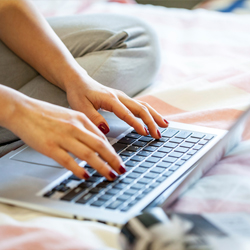 With overflowing inboxes and little time, it’s tempting to cut corners in the name of e-laziness before clicking send. After all, with so much bad email bouncing around who is going to notice? Trust me-we notice. Because it can be difficult to know what the rules are (there are rules?), here’s a cheat sheet of popular missteps and how to correct them quickly and painlessly.

Use Sparingly:
Multiple Question Marks – i.e. Huh??? These read like an over-the-top eye roll. They’re snooty, unprofessional and won’t win you many fans around the office.
Exclamation points – Come on! You can’t possibly be that excited. Besides, there’s something juvenile about too many on a page i.e. “He’s like totally amazing!!!”
ALL CAPS – These are the email equivalent of yelling and really – since when was it acceptable to scream at work?
Reply All – Abusing this is the single fastest way to irritate an entire mailing list simultaneously. Not everyone cares that you can’t attend the meeting because you’re having a mole removed.
Forward – The cute, the funny, the heartwarming-No. None. Stop it. Save them for family and non-work friends.

Proofread Everything-and I Mean Everything
Job applications, query letters and proposals might seem obvious – but friendly email? Make a habit of treating each email like it matters and you’ll be less inclined to take shortcuts that can negatively impact your image. Remember, spell-check isn’t failsafe. Reread email before sending, and print and read all critical or sensitive email. Printed errors seem to leap off the page whereas they often slip by unnoticed on the monitor.

Keep it Clean
By this time we should all know that nothing we type in the office is completely private. If you composed it on a company machine it’s company property-plain and simple. You have no right to call foul should your words be used against you at a later date. We’ve all heard office gossip about what was found on so-and-so’s computer after they left the company. In general if it’s hideous, someone will leak it.

Address with Extreme Care
Even if your boss (or the pimply-faced kid from IT) never browses through your inbox there’s still room for humiliation if a wayward email should fall into the wrong hands.

Gigi* accidentally sent a document listing the salaries of all company employees to the entire office. She was unceremoniously fired. “Instead of sending it to Nora in HR, I sent it to the entire N.Y. office. Luckily it was early in my career, but it’s a lesson I will never forget.”

Michelle* sent a lengthy, detailed description of her …er, elimination problem to the head of a major movie studio. In it she mentioned having recently purchased an enema, a word that I am reticent to even type. It had been intended for her best friend whose name began with the same letters (damn you auto fill!). Needless to say, she experiences the idiot shivers each time she sees the studio president at premieres. Remember, even if the person on the receiving end of a wayward email laughs it off – they’re still sure to take note of the fact that you aren’t exactly meticulous.

Tone Deaf
The slipperiest slope of all email debacles is tone. It’s so open to interpretation that a single crossed wire can set off an avalanche of hurt feelings. Once, my friend Lisa* called to read me a supposedly nasty email over the phone (complete with theatrically hostile voice). When I told her that in my opinion – the email was fine, she was stunned. Of course, it was too late. She’d already replied rudely and set in motion an ugly e-spat that took months to smooth over. Solution? If you receive an email that rubs you the wrong way, try reading with a huge smile on your face. Chances are it won’t sound nearly so bitchy. Still unclear? Pick up the phone or (gasp) walk to the sender’s office. It’s much easier to judge intention if you can hear or see the other person and it’s a way to guarantee that nothing gets misconstrued.

Anger Management
Tempted to fire off a sarcastic or snotty email? Count to ten and ask yourself, “Would I speak to someone this way if we were face to face?” Work is a place where you get paid to do things you don’t always want to do – like be respectful to everyone regardless of personal feelings.

E-Karma
You will almost always be busted for e-slagging a peer. Think long and hard before typing anything disparaging about a coworker, especially to a higher-up. You can bet your bonus that seconds after you type: “The report is late because Jennifer isn’t carrying her weight,” it’s been forwarded to Jennifer, either by accident or more embarrassingly, on purpose. Superiors love to nip blame-passing in the bud this way. It’s their way of saying “work it out yourself.” Ouch!

*Names have been changed to protect the mortified.