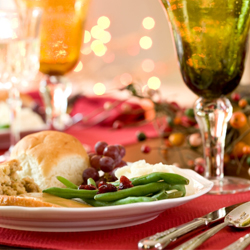 With airline prices on the rise, not everyone can afford to go home for the holidays. Which means you might find yourself in charge of cooking this year’s Thanksgiving bird. While spending the holidays with a few close friends sounds cozy and charming (none of Aunt Jill’s endless questions about your job and romantic life), cooking one of the biggest feasts of the year can be completely overwhelming. That’s why WORKS has done it all for you: A simple turkey, festive salad, roasted yams, and to-die-for pumpkin bread pudding make for a delicious Thanksgiving Day, indeed.

Ask friends to bring a bottle of wine and a favorite side dish from home, and you’ve got a traditional yet modern meal you and your guests will remember for years to come.

The Turkey
Here’s a turkey recipe that takes all of the guesswork out of cooking. Instead of roasting the turkey whole, purchase a butchered one that will cook more evenly and quickly than a big bird. Also, don’t forget to budget time to brine the turkey parts (see below for instructions). Doing so will help make the bird succulent and perfect. Serves 8.

Ask the butcher to cut up a small (around 10–12 pound) turkey. You’ll end up with:
1 turkey breast on the bone
2 drumsticks
2 thighs

2. Preheat oven to 425 degrees. Remove turkey parts from brine. Pat dry with paper towels and place skin side up on racks in two roasting pans (make sure to leave room between the turkey parts for circulation). Pour 1 cup water into each pan. Drizzle turkey parts with melted butter and scatter with sage leaves. Place 1 pan on each rack and roast until beginning to brown, about 30 minutes.

3. Lower the heat to 400 degrees, switch the pans, and rotate them 180 degrees. Continue roasting until an instant-read thermometer inserted into the thickest part of the breast (careful to avoid the bone) registers 165 degrees. This will take about 1¼ hours. Serve turkey on a platter garnished with sage leaves.

Apple Shallot Stuffing
This easy stuffing can be assembled, covered, and chilled (but not baked) two days before Thanksgiving. Be sure to bring the dish to room temp before baking. Serves 8.

1. Preheat oven to 325. Spread bread cubes in two shallow baking pans and bake in upper and lower thirds of the oven, switching positions halfway through baking, until golden, about 20 to 25 minutes total. Cool bread in pans on racks, then transfer to a large bowl.

2. Melt butter in a 12-inch, heavy skillet over medium heat, then add shallots and cook, stirring frequently, until shallots are well browned, 15 to 20 minutes.

5. Transfer stuffing to a buttered 3-to-3½ quart shallow baking dish. Bake, covered, on middle rack for 30 minutes, then uncover and bake until browned for about 30 minutes more.

Marguerite’s Mixed Greens
A holiday favorite from my house to yours. This salad is so fabulous you’ll want to serve it for all your special occasions.
Serves 6 to 8.

1. Put pecan halves and sugar in a small pan over low heat. Cook for 2 to 3 minutes, stirring often until sugar dissolves and coats the pecans. Remove from heat and cool to remove temperature (break up pecan halves if they are stuck together).

2. Place greens in large serving bowl. Sprinkle with cranberries, blue cheese, and sliced onion and top with chunks of orange and pear. Sprinkle with sugared pecans.

Combine the vinegar, mustard, salt, and pepper in a small bowl. Whisk in the oil until incorporated. Pour dressing over salad just before serving.

Roasted Yam Halves
Roasting yams saves you time and energy—no need to boil and mash the potatoes or worry about the lumps! Serves 8 (1/2 yam per person).

Preheat oven to 400. Halve yams and place cut side up in a shallow baking dish large enough to hold them in a single layer. Drizzle with olive oil and sprinkle with salt and pepper. Bake until golden brown and very tender, 35 to 45 minutes.

Pumpkin Bread Pudding With Caramel Sauce
A modern twist on pumpkin pie that is guaranteed to be the opulent grand finale of a fabulous Thanksgiving meal. Serves at least 8.

2. To make sauce: Whisk brown sugar and butter in a heavy medium saucepan over medium heat until the butter is melted. Whisk in cream and stir until sugar dissolves and sauce is smooth, about three minutes.

Sprinkle powdered sugar over the bread pudding and serve warm topped with the caramel sauce.