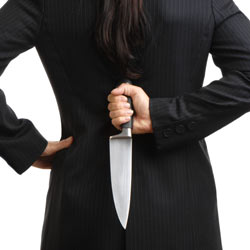 The first day on the job is kind of like the beginning of a new school year. Yes, you want to do well, but let’s be honest: the only thing running through your mind as you wade through the sea of unfamiliar faces is, “Will anyone like me?” And then, blessedly, as you settle into your new space, one of your co-workers stops by your office to introduce herself with a warm smile and an invitation to lunch. You feel relieved, like you’ve found a new friend. The lovefest continues until a few months later, when you’re both up for the same project or promotion and your “friend” suddenly becomes your worst enemy, undermining you at every turn. Yup, you’ve got a case of the “frenemies,” which you might not even realize, since she’s keeping her chummy charade up to your face. So pull the knife out of your back and know that you’re not alone. These women also have frenemy scars. Read on.

I worked my ass off for two years for this totally corrupt woman—she was sleeping with her intern to give you an idea—but I did it because she had given me a huge break by letting me edit her really cool, hip, city magazine. I knew it was good experience and would hopefully lead to bigger things. About a year into working for her, I started sending my resume to magazines in New York and finally got a call from a big publishing company. I went for an interview, which led to a really great job offer at a well regarded, successful magazine. When I told my boss I was leaving, she didn’t take it well. After I started my new job, I found out that the bitch called up my new boss and told her a string of lies about me: that I had no talent, stole her ideas, was a complete fake. Fortunately, my new boss didn’t believe her and a month after I left, her magazine folded. Ha!
-Stephanie, Charleston, SC

I had a friend and client who I had known for 20 years. I had even introduced her to her husband, who was also my client. When they moved into their new house and were looking to furnish it, I generously offered her my professional discount. She happily took it and saved thousands of dollars. Everything was fine until she got upset because a table I had ordered for her was taking too long to arrive. She called me up and started screaming at me, accusing me of lying to her (she hadn’t paid for the furniture yet and when I pointed this out to her, she insisted she had and that I was trying to scam her). Then she began attacking me personally, saying that I talk too much and none of my clients like me. What’s worse is that she forbid her husband—one of my biggest clients— from ever doing business with me again, and then trashed my good name amongst our circle of friends, saying that I was a shady businesswoman. The kicker though was that after I saved her a ton of money—almost $20,000—she had the nerve to stiff me on my bill of $2,000!
-Lisa, New York, NY

For the first time in seven years, I had decided to take the week of Christmas off. One of my work friends, who had always seemed like such a nice person, volunteered to cover for me, a huge weight off my back. Big mistake. After I was gone, she told our boss that I had left her completely unprepared and all hell was breaking loose, which wasn’t true at all. My boss called me on vacation and read me the riot act. I never trusted my “friend” again.
-Meghan, Austin, Texas

I was interning at a newspaper, when one of my editors gave me a pretty big assignment writing about these controversial musicians who were anti-semitic. There were a lot of legal ins and outs to the story and I didn’t have nearly enough experience, but my editor told me that she believed I could handle it. Unfortunately, word got out that we were planning to give these musicians publicity and a protest broke out in front of our office building, demanding we kill the story. After much debate, the head of the company decided to pull it, but not before wanting to know whose idea it was in the first place. My editor blamed me, because I was just an intern, and if she had admitted that she acted irresponsibly, she would have been fired. Instead, I almost didn’t get offered a job at the company when I graduated, because the boss thought I was a total moron.
-Elizabeth, San Francisco, Calif.

I’m the youngest attorney at my law firm and one of the senior partners has really taken an interest in my career, which I appreciate. He gives me a lot of opportunities and has told me that he’s grooming me to take over for him one day. I work extremely long hours, so having a competent secretary is really important. I thought I hit the jackpot with mine because she’s really smart and is a huge help to me. But she’s also a big gossip, and unfortunately, I haven’t been spared. Turns out she’s been telling the whole office that she saw me making out with my boss in the elevator, which is totally, completely untrue! Now my co-workers think that the only reason I’ve done well is because I’m sleeping with my boss.
-Jennifer, Chicago, Ill.