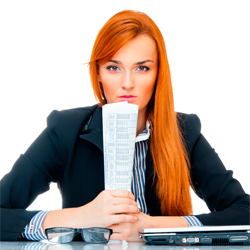 There she was on Good Morning America. There I was sitting on my couch. Watching Diane Sawyer, head thrown back, apparently delighted with her guest, my arch-nemesis, provoked in me a feeling that can only be described in one word – ENVY.

I looked it up somehow hoping for a more flattering connotation. No such luck. Envy is defined as: “A feeling of discontent and resentment aroused by and in conjunction with desire for the possessions or qualities of another.”

I was discontent.
I was resentful.
I was filled with desire for what she had.

After days of stewing over my ill-will, I finally got my ass off the couch and decided to use my envy for good. I kept thinking about the definition of envy and I realized that I could use each of its negative connotations to bring about positive change for myself. You can too. Let’s start by breaking the definition down:

Feeling of discontent. In working with women to create career success, one of the more interesting things I find is that while we are living with a general sense of discontent, we can’t put our finger on what the actual problem is. On the day I caught the GMA segment, I was in this place of “I feel like shit. I don’t know what exactly I want, but I know it’s not this”.

The insidiousness of discontent lives in not allowing yourself to actually admit it, feel it and work your way through it. Change doesn’t come easily and sometimes you need to be down right sick of yourself and your life to take action. At this stage, don’t even try to name what it is that you want, just let yourself rant about everything you don’t want. Name your discontent. Write down every single thing you can’t stand about your life.

Resentment. I’m in the business of applauding, helping, supporting and empowering women. I see women in positions that I covet every single day. I’m familiar with having pangs of “I want that for myself.” But this was different. Not only did I want it, I didn’t want her to have it. I’m fully aware of how unflattering this sounds, but it’s the truth. And the other truth is that if I didn’t feel so strongly about this woman, I don’t know to what degree I could have pushed my desire forward.

First and foremost you have to understand that the universe is doing its own policing. The friend who stole— and is now married to— your boyfriend, the boss who took credit for your idea and got a whopping promotion, my aforementioned nemesis who, if I could, I would tell you what she did to me, they’re all going to get what’s coming to them and it’s not your job to dish it out (even if you might want to). Second and more importantly, the real power of resentment is to turn the equation from “Why her?” to “Why me?” Consider all the reasons why you deserve this thing you desire.

A desire for the possessions of another. I have a sneaking suspicion that men don’t feel the same way. But for us good girls, it’s simply not nice to covet what other people have. In the case of envy, nice or not nice is irrelevant. Envy allows you to recognize your own desire through someone else. Take it where you can get it! The point is that you want what you want and sometimes you need to see someone else with it before you realize your life just won’t be the same without it.

When you see something that other people have – a loving relationship, a job they’re passionate about, a Chanel bag —imagine yourself with it. Talk about it as if it’s a certainty. Write it down. Cut out pictures of your desire and paste them onto a piece a corkboard. (Yes, I have been reading a little too much of The Secret.)

The best part of seeing someone in a position you want is knowing there’s a path for you to get there too. How did this woman get on GMA? Either she knows a producer or she has a publicist. She watched the show to figure out what they’re booking. She pitched an idea that would be of interest to their audience in an area she has some expertise around. Voila! I called some contacts to ask some questions. Figured out the landscape. Broke it down. And did exactly the same thing.