Networking With Your Family 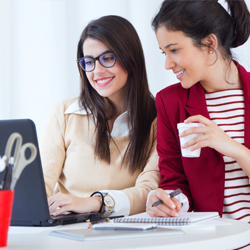 Often family members can be a good resource for career advice or networking opportunities. But sometimes this can introduce extra baggage into the relationship, like when someone offers outdated advice to an out-of-work relative or the line between cousin and co-worker becomes blurred. And since the holidays are filled with family gatherings, the opportunities—and the offensive comments—are sure to abound. Here’s how to handle three common situations.

Sticky Situation #1: You love what you do, but Aunt Mildred thinks you ought to grow up and get a “real job,” like becoming a doctor or lawyer. There are several reasons why dear Aunt Milly might make this well-intentioned but wildly off-base suggestion. She could be projecting her own ambitions onto you or worrying that you won’t be able to support yourself as a party planner or Web designer. Maybe she just doesn’t understand what you do. Instead of getting defensive (“Once my screenplay sells, I won’t have to worry about money anymore!”), reassure her that you’re happy and able to support yourself. Then share some exciting news from the past year, like when your Web start-up got mentioned in the paper or your catering company landed a big client. Just be glad she’s bringing up your career instead of your biological clock.

Sticky Situation #2: Your cousin Cindy just landed a job at your favorite fashion magazine. You’re dying to ask her how she did it, but you don’t want to be too forward. Ask a few (not overly specific) questions and show genuine interest in Cindy’s accomplishments. Then ask if you can continue the conversation later so she doesn’t have to spend the whole evening talking shop. Instead of asking if she’ll forward your résumé to the features editor, see if she’ll take a look at it before you apply for a job yourself. If she sees potential, she might offer to forward it for you. If she doesn’t offer, don’t push it. Remember, if your roles were reversed, you wouldn’t want the awkward task of telling a family member they aren’t ready for the big leagues yet.

Sticky Situation #3: You’re out of work, and your uncle Marty needs a new sales manager. The job is practically yours, but you don’t want your new co-workers to hate you just because you’re the boss’ niece. Tell Uncle Marty you’re honored, then ask to set up a meeting with HR so you can go through the usual hiring channels. Or, if there’s no HR department, at least ask to speak with your future co-workers. That way you’ll get a realistic sense of what the job entails, and Marty will understand that you don’t expect special treatment just because you’re family. Be honest with your co-workers, but try not to remind them of your family connections or joke about other relatives in front of them (they’ll feel like it’s an inside joke they’re not part of). Once you establish yourself as a stellar sales manager, the other stuff will seem less important.