Are You Sacrificing Too Much? 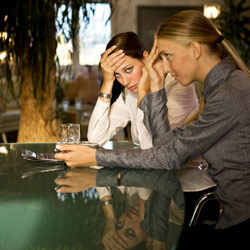 I’ve watched my friend Valerie go through a totally tumultuous break-up over the last couple of months and in listening to her, I’ve come to more clearly understand the difference between deprivation and sacrifice.

So to make a way too long story short, Valerie had decided it was time. She was going to leave her fiancé of five years. It had been a surprisingly long time coming. Almost as soon as he proposed, she was vaguely aware of a sense of dread, of the feeling that something wasn’t quite right. Her family and friends delighted, the wedding registry chosen, her biological clock ticking, she pushed down her feelings of, “maybe I shouldn’t” for years. And then the fateful day arrived. With what she described as a feeling of “there has to be something more,” she decided it was time to sacrifice the relationship.

That was, of course, until he agreed. Yes, he agreed. In a fit of “oh my god what have I done,” she tried to convince him of all the reasons why this relationship might actually be worth salvaging. But he had already decided. He wasn’t interested. All of sudden Valerie’s feeling of elation over her decision to sacrifice turned into a sad, fearful, sick feeling of deprivation.
Exactly the same outcome, completely different experience. When she chose it was sacrifice, when he chose it was deprivation.

Who hasn’t had this kind of experience? Deciding to leave your job and being fired have the same outcome with completely different experiences attached. The reality is, human nature is such that we want what we can’t have. This is an essential thing to remember in the face of choice around debt and investment.

It seems so obvious, but really, consciously considering the difference between deprivation and sacrifice is an incredible way to not only face a choice, but to ensure you can really live with it. The next time you decide to go without the latest Jimmy Choos, the second piece of cake or drinks with the girls, ask yourself: is this deprivation or sacrifice? There are a few ways to make your sacrifices just a little bit easier. Be prepared and you’ll be ahead of the game.

WITHOUT DISCIPLINE, THERE’S NO LIFE AT ALL.
Katharine Hepburn

Keep Your Nose Away From The Glass
When you’ve made a choice or a sacrifice and you need to exhibit self-control, stay away – far away – from your vice. If you’ve just started the Atkins diet, you really shouldn’t meet your best friend for coffee at Krispy Kreme. If you’ve decided that you need to build more security and permanence in your job, don’t hang out with a group of entrepreneurs or friends who are embarking on major career leaps. For now, surround yourself with people who are on a parallel path or who have achieved what you’re trying to build.

Fuel Your Choices
Let’s say you just started working part-time in order to write your screenplay. Now you’ve got to watch your spending and stop ordering so much take-out. You’re sacrificing some money and convenience in order to achieve a passionate personal goal. Fantastic. Feel good about your choice and then make it as doable as possible. Create a welcoming space for writing. Stock up on coffee, tea, or whatever beverage fuels your creativity – unless maybe that beverage is a gin martini. If the morning is your most productive time, go to bed early enough to rise and write. Smooth your own path and revel in the power of your choices.

Get Some Perspective
Sacrifice is all a matter of degree. While completing my last year at University, I spent a semester studying in Russia. On most days, the prospect of a hot shower was somewhere between slim and none. I came home after six weeks of jolting my body in and out of frigid water with an almost religious appreciation for hot showers. If you feel like giving up a new Gucci bag is tough stuff, you really need to give your head a shake. In North America, most of us barely know the meaning of deprivation. Remember that it’s all relative.