Have a Sense of Humor 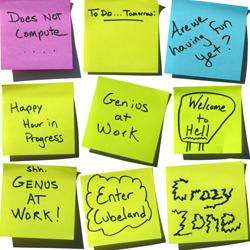 You’d be hard-pressed to find someone who wouldn’t want to work with funny woman Tina Fey. Her irresistible wit and charm help to make her one of the most in-demand people in the entertainment business.

As it turns out, a sense of humor is one of the top attributes sought out by employers. “I look for people who like to joke around because it lets us leave our egos at the door,” says our own Nicole Williams. “It builds relationships, provides perspective, and facilitates communication. Plus, laughing can help to reduce stress, increase creativity, and boost team morale—which we all need in this economy!”

In fact, according to CareerBuilder.com, 91 percent of executives recently surveyed consider a sense of humor important to career advancement. So if you’re sitting straight-faced for eight hours without cracking a smile, you probably aren’t winning any points for being proper. Here, some tactics to help you show off your inner comedian at work.

Be the butt of your own joke. When you don’t take yourself too seriously, others see you as more approachable. Though it’s important to be your best advocate, sometimes it doesn’t hurt to throw in a joke or two about your weaknesses. Stick to subjects unrelated to work, such as your clumsy cooking skills or your questionable TV taste.

Move past awkward moments. Your colleague has ranch dressing on his cheek. A client offers TMI about his wild night out. Telling a joke in situations like these takes the attention away from the person who feels embarrassed. It creates a team-like “We’ve all been there before” feeling, giving everyone permission to relax a little.

Make light of mistakes. The best thing to do when you mess up is to immediately take responsibility, apologize, and figure out a way to ensure it won’t happen again. However, when others make a mistake, it’s the perfect time to offer up some comic relief. It’s all about defusing the humiliation, easing the pressure, and helping the other person recover more quickly so he or she can move on to more important things. Think about how much better you would have felt had your boss cracked a joke that time you accidentally hit “reply to all.”

Bring together a diverse crowd. In a room full of people from different professional and ethnic backgrounds, jokes can help establish commonality. A teleconference, a sales rep convention, a client meeting—all perfect opportunities to build camaraderie.

Don’t make assumptions. Just because everyone you hang out with TiVos “Family Guy” doesn’t mean the eclectic mix of people in your office do. No matter what you might laugh at on your own time, avoid telling (or giggling at!) jokes in the office having to do with sexual orientation, religion, politics, or race.

Stay away from jabs. Though you may be able to bust on your friends for an unfortunate fashion decision or the dreadful snort that accompanies their laugh, you can’t assume that you’re close enough to colleagues to call them out on their shortcomings. Insults, though playful, have no payoff at work.