Setting Up Your Co-Workers 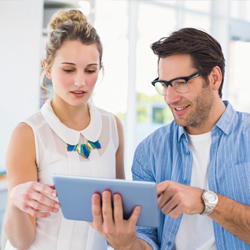 Thinking about setting up your best mate with your cubicle mate? Think twice. Though it’s not as risky as dating a co-worker yourself, making romantic connections at the office can still have repercussions. If you decide to brave the matchmaking mayhem, make sure the conditions are right (and be prepared for an awkward moment or two).

Condition #1: Your co-worker isn’t a jerk. If he’s got the reputation of a player or he’s the type to kiss and tell, stay away from setting them up no matter how right you think they’d be together. The resentment you feel toward him when he screws her over will be difficult to mask at work, and you don’t need to find out that your friend is a freak in bed through the office grapevine.

Condition #2: Your friend isn’t desperate. If all of a sudden she’s calling him at work, emailing you to ask what he’s wearing, and knitting sweaters for their unborn children, your friend (and you by default) will be the butt of water cooler jokes for months to come. Make sure she’s mentally stable, versed in the game of dating, and comfortable with the fact that it might not work out.

Condition #3: You know your friend well. They say you can tell a man’s character by the company he keeps. If you’re going to introduce a friend to a co-worker who has a say in your success, be sure it’s a bud who won’t make an ass of herself. If she thinks cabernet is a type of furniture, prides herself on going all the way on the first date, or causes a drunken scene every time she goes out, be aware that your co-worker (and whomever he tells) might make the same assumptions about you.

Condition #4: You don’t get caught in the middle. It’s all fun and flirty romance in the beginning when he wants to know about her taste in music, what kind of food she likes, and what she does for a living. But just wait until they have their first fight and he demands to know why your friend is such a bitch, who’s side you’re on, and how you’d suggest he dig himself out of this mess. To give a potential relationship its best chance at success, make the introduction and leave it at that. Give them room to get to know each other on their own terms, and don’t ask for any dirty details or you’ll hear more than you ever cared to know.

Condition #5: You don’t have ulterior motives. If you’re looking for an in with a higher up, keep in mind that while scoring him nookie is a noble cause, it doesn’t translate to respect in the workplace (unless he’s an ass, in which case you’d be breaking Condition #1). Or, if you’re expecting the favor to be returned, don’t count on it—most people prefer to spare their friends from these types of uncomfortable circumstances. And finally, if you’re just plain bored with your own love life and looking to live vicariously through someone else’s, well, perhaps your friend should be the one doing the setting up.