How to Spot a Bad Boss 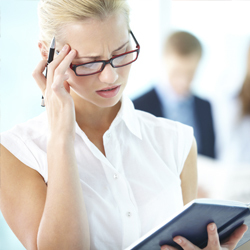 You can tell a lot about a potential employer by the way they behave on your job interview—including whether you should work for them or go running for the hills. Here are some subtle clues that should make you think twice before saying yes to their offer.

Her appearance is disheveled. Does she look like she set the world record for getting ready in the morning (disorganized or distracted)? Are there dark bags under her eyes (workaholic)? Is her posture slouchy (disinterested)? You can bet your interviewer is judging you the same way, so by all means, have at it. If her appearance hasn’t improved by the second interview, perhaps it wasn’t just an off day.

There’s something strange about her office decor. Maybe it’s her desk stacked with self-help titles like Don’t Get Mad, Get Even or Control Freaks Anonymous. Maybe it’s the framed head shots of her everywhere, the alphabetized and color-coded bookshelf or the collages for each of her seven cats. Signs that your potential boss is on edge, an egomaniac, or has no life outside of work may be easily detected by her surroundings.

She displays disrespectful or contradictory behavior. Did she miss the memo on treating the janitor and CEO with equal respect? Does she interrupt your interview to answer e-mails without an apology? Does she curse her assistant under her breath, then turn to you with a smile? Look for behavior that suggests she’s putting on a temporary front for the sake of winning you over.

She asks inappropriate questions. Things like: “What is your ethnic background?” “What do your parents do?” “Are you divorced?” Any questions that seem just a bit too personal or straddle the line between interrogation and intrusion are hints that she’s got ulterior motives—or is just plain rude.

There’s a lack of connection. Of course it’s up to you to be engaging and peak her interest. But if you get the sense that she hasn’t heard a word you’ve said, you might not be the only one in the room on the job hunt. If her body language and eye contact suggest she’s not interested and she hasn’t attempted to sell the position with confidence, perhaps she’s already checked out. At the very least, it’s a sign that you and this position are not a priority.

The last person left because of the “environment.” When you ask why the position is available (and you always should), be wary if the answer has to do with an environment that wasn’t ideal for the last employee. Combine this with a high turnover rate and you can bet your boss has something mean going on.

She won’t give you a written agreement. Some people will tell you what you want to hear in order to get what they need in that instant. This might mean verbally offering you a job so they have a backup in case their top candidate falls through, or assuring you there’ll be “ample” vacation days and “minimal” admin duties if it gets you to seal the deal. The point? Get it in writing and in as much detail as possible. Anyone who claims a contract implies a lack of trust may be looking to take advantage of you (unless you’re dealing with some Eastern cultures where verbal agreements are more commonplace).

Your gut says no. The most significant factor to consider when debating an offer is your instinct. Better to wait it out for the right one than to be stuck in another dead-end job with a nightmare boss. If it’s not an atmosphere you can see yourself being comfortable walking into each day, move on!