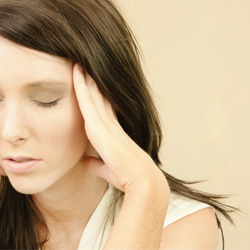 It’s arguably the trickiest job in the office, especially when under scrutiny from competitive colleagues and exacting bosses. Sure, we’ve all felt the alpha-female thrill of taking on more to showcase our kick-ass efficiency, but sometimes there’s just too much to get done—which can lead to a major meltdown. “Limited time and overwhelm are the biggest contributors to pressure,” explains Talane Miedaner, author of Coach Yourself to Success. “They scatter your focus, making it impossible to complete anything and leaving us erratically firefighting every tiny task.”

Here, a few ways to keep stress at bay.

Skip the second (or fourth) cup of coffee. “Caffeine stimulates the adrenals, giving the illusion of accomplishment because you’re rushing,” says Miedaner. “Substitute your stop-and-regroup java hit for a protein snack (like nuts) to balance energy and moods when the pressure’s on.”

Ask for help prioritizing. “Bosses often have no idea of an individual’s workload. You could be wasting time on something no longer pressing,” says Miedaner. “Give your boss a physical list of your commitments. They’ll immediately clock what isn’t critical and could cut your workload instantly.” If you do get asked to take on more work, don’t refuse; simply rejigger your schedule. “Say, ‘Sure, I can do this. But I’m going to put project x on hold if that’s okay.’ The trick is to pass the prioritizing ball back to your boss,” says Miedaner.

Don’t over-promise, and then under-deliver. The scenario: Our boss asks when a project will be finished, we offer an impressive but unrealistic deadline—then kill ourselves trying to get it done. Miedaner’s solution: Double the time you’re about to pro-offer. “You’ll likely complete the project early,” (score!) “and you’ve got breathing space if you screw up.”

Never raise your voice. “It’s the biggest giveaway that you’re under pressure,” explains Miedaner. “Maintain a neutral tone and pretty much anything you say will sound controlled and cool. Simply think a neutral thought like ‘The sky is blue’ before speaking. It keeps your voice steady.” Also, drop the “I” from your sentences. “Cool people make statements,” says Miedaner. “They don’t offer opinions.”