How to Talk About Money 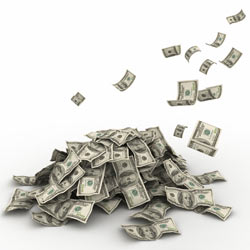 There’s the friend who complains about never having enough money yet has a closetful of designer bags. Or the old colleague who suggests splitting the bill evenly every time you meet for sushi. When it comes to prickly cash flow conversations, how can you avoid offending friends or looking like a cheapskate? Here, a few common cash conundrums and how to handle them—with your dignity and pocketbook intact.

“Let’s split the bill down the middle.” If you’re on a budget, it’s silly to pay more than you owe, even if your friends typically split the check. Before you order, say, “I only brought $20 in cash with me, so I’m going to make sure my total is less than that.” Or, when being seated, ask “Does anyone mind if I pay separately?” Anna Post, spokesperson for the Emily Post Institute for Etiquette, says being up front is the best approach. She also suggests speaking up for someone else if you notice they owe a lesser amount. They might be more willing to do the same for you next time around.

“How much do you make?” If someone asks outright how much money you make and you’d prefer not to answer this question, Anna suggests responding with a joke, like “Who wants to hear about that?” or “Never as much as we want, right?” Drop subtle hints until she understands that the topic is not open to discussion. And what about if you want to know how much someone makes? There aren’t many occasions when this would be appropriate, warns Anna. “But if you were to ask, the only way to do it is to first say, ‘Do you mind my asking…?’”

“Can you afford that?” When someone makes a judgment about what you spend your money on, don’t be offended. She’s probably just looking out for you. Thank her for the concern and assure her that you’re all set.

“Ugh, I’m so broke. Let’s get pedis.” Think about how you felt when your spending habits were judged. It’s best to bite your lip in this situation, unless you’re truly afraid for your friend’s financial stability. “But that’s not a casual conversation,” says Anna. “You have to be prepared to discuss it as though it’s a true problem.”

“Will you donate to my daughter’s fund-raiser?” Who can say no to that without feeling a twinge of guilt? If you’re unsure whether you’d like to donate, simply say, “Let me think about it. I’ll come find you,” recommends Anna. And don’t put others in the same uncomfortable situation. If you’re doing the collecting, make an announcement that there’s an envelope sitting at your desk if anyone would like to contribute.

“Could I borrow a few bucks?” Before you lend money to a friend, ask yourself, “Will it really bother me if I don’t see this money again?” That should tell you whether it’s in your comfort zone to say yes. If you’ve forked over the cash a few times already, try a brief and honest reply: “I’ve really got to look out for my own finances. I hope you understand.”

“Where’s my money?” When someone owes you money, a good rule of thumb is “Ask once, remind once,” says Anna. “After that, it’s a personal decision about whether to pursue it further or let it go.”

“Let’s go all out tonight.” Particularly if your friends make more money than you, it can be difficult to keep up with their lavish lifestyles. If you’re afraid of being a downer, frame a less pricey option as a new adventure. For example: “Do you guys like Thai food? There’s this adorable place I’ve been wanting to try.” Or, “I’ve always wanted to go to that make-your-own- pottery store. Anyone want to come with me Friday night?” People assume that you get what you pay for. But is a club with a $20 cover really more fun than a bar without one? If you can prove them wrong once, you might be able to remind them that it’s not where you are but who you’re with that counts!