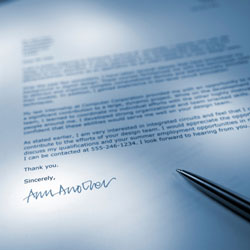 Since the advent of e-mail, and the Letter Wizard feature on Microsoft Word, it often seems like drafting your own letters is a quaint tradition, but nothing you really need to think about. Au contraire! A well-written letter is the hallmark of a consummate professional, and having confidence in a number of different writing styles is a handy addition to any working woman’s arsenal. After all, they don’t call it the power of the pen for nothing. Here, we’ve taken five popular letter styles and provided tips on how to make them sing—no newfangled technology required.

The Thank-You Note
According to the Emily Post Institute (the bastion of modern manners), all gifts deserve to be recognized with a thank-you note. Remember, gifts can be services as well as items, so if someone agreed to collect your mail while you were away, a thank-you note would be appropriate. Notes are informal and may be brief, but should communicate that you were pleased to receive the gift. A brief line that incorporates the gift into your life (for example: “I look forward to a summer picnic with my gorgeous new basket”) is a thoughtful addition. If you communicate with the gift giver frequently via e-mail, then sending your note electronically is fine.

The Cover Letter
Whether you are submitting an application via e-mail or snail mail, a sparkling cover letter is the best way to catch someone’s attention. Customize your cover letter to the job. Each and every time you apply for a new position, use your cover letter to market yourself specifically to the opportunity. Make sure you address your letter to the correct person, discuss why you would be a valuable addition to the company, and go ahead and ask for what you want—whether it be a phone call, an appointment to discuss opportunities, or a formal interview. Signing off with a no-nonsense “Sincerely” will also cement your professional image.

The Pitch Letter
A pitch letter is one of a public relations professional’s biggest and best tools. Pitch letters are sent to members of the media with the sole intention of grabbing their attention and making them ask for more details. Pitch letters may be sent alone or with an accompanying press packet, but they mean nothing if they don’t get into the right hands. Pitch letters should be addressed to the most relevant person, be kept to a single page, and include only the most pertinent facts: who you are, what you’re writing about, when and where something is happening, and why the person should be interested. Including all of your contact information is also imperative.

The Letter of Complaint
Ellen Phillips, the author of Shocked, Appalled, and Dismayed! advises that a letter of complaint should never be sent to a customer-service department. Instead, it should be addressed to a real, live person with real, live powers to help correct mistakes. Phillips believes that letters of complaint should include strong sentiments and aggressive vocabulary (along the lines of “shocked,” “appalled,” and “dismayed”), but should be polite throughout. Need a sneaky trick? Print your letter of complaint on bright colored paper to avoid getting lost in the masses of white paper that the company no doubt receives daily.

The Letter of Recommendation
You might have wished that letters of recommendation ended at about the same time you got into college, but they do still persist well into adult life—only now you’re more like to be writing one than begging for one. A letter of recommendation is not an opportunity to indulge in a flight of fancy. Stick to the facts: how you know the candidate, your honest assessment of them, and why you think he or she would be a good selection. Generally this means only writing about people that you know fairly well, though asking for copies of their résumé won’t hurt either. Also, ask the person if you are an employment reference or character reference, as the answer will determine what you should focus on in your writing. Finally, if you truly feel that you cannot give a good letter of recommendation, then say so. Politely declining to write such a letter gives the candidate another opportunity to find a more suitable reference and saves you the time and energy you would have spent on such an impossible task.