What to Drink at the Office Party 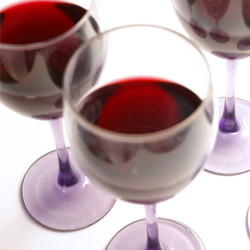 If your office party wasn’t canceled due to budget cuts this year (tough luck), you’ll have to face the inevitable decision of what to drink—or perhaps more importantly, what not to drink—at the company affair. Here, some clues for picking the right booze.

Red Wine: Mature, discerning, wise… The traits of red wine translate well to the work environment. You can’t really go wrong with a red, but if you’re unsure what to order, go for a Syrah or a cabernet, which are both typically full-bodied and complex. White Wine: White wine suggests that you’re sophisticated, and even entrepreneurial, but no matter what, stay away from white zinfandel (which seems to have struck a chord with suburban soccer moms and cougars alike). Instead, opt for a sauvignon blanc or a pinot grigio.

Imported Beer: A safe choice, imported beer hints that you are adventurous and creative, and you pay attention to detail. You can hang with the boys’ club, yet still be refined. Some smart picks: Stella Artois, Bass, and Amstel.

Domestic Beer: Coors, Miller Lite, PBR… All are fine to drink when you’re out on the town with close buds or on a budget. But this is on the company dime, so step it up to something a little classier.

Champagne: It’s okay to order, but don’t expect it to be very good. And if they don’t have it, they’ll probably give you the American version, which is actually just sparkling wine. Whichever you get, don’t swirl it, or it will destroy the effervescence… Sure sign of a novice!

Red Bull & Vodka: The night is young, the after-party’s at your place, and we can bet you won’t be functioning at any sort of productive level tomorrow. Save the RBVs for the weekend benders you don’t tell your colleagues about.

Martini: Dirty or dry, these are for people who really enjoy the taste of liquor. They also tend to be particular and confident, with a certain air of mystery. If you really are a regular, give it a go; otherwise, leave martinis to the Daniel Craig types. And don’t try to fake it with any of those fruity add-ons, either.

Whisky or Scotch: Ordering this is like announcing to your colleagues: “I may or may not have more than your average number of alcoholic beverages a week.” If whisky or scotch is your vice, have one and then move on to something more socially acceptable.

Cosmo: Maybe you missed the memo, but cosmos are old news. To avoid looking unoriginal and out of touch, stay away. Gin & Tonic: As with Red Bull & vodka and rum & Coke, everyone will likely be taking bets on how late you’ll be tomorrow. You’ll know its time to cut yourself off when you hear people murmuring something about “using your inside voice.”

Frozen Drinks: Unless you’re at a Mexican restaurant and margaritas are their specialty, now is not the time or place. As with fruitinis, watch as people behind you in line get pissed while the bartender spends 10 minutes making your drink.

Virgin Cocktails, The Secret Weapon: Before you reveal your affair with your boss or tell your co-worker she looks like Roseanne Barr, switch to a mocktail. Here are two that work like a charm:

Manhattan: Cranberry, orange, and cherry juice with a splash of lemon… Looks just like the original in the glass.

Tonic With Lime: This could pass for a number of real drinks, but you’re the only one who has to know the truth… .