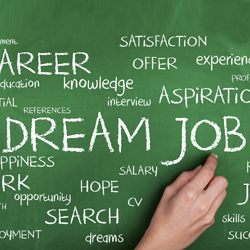 When you graduated from college and entered the real world, you probably pictured yourself writing hard-hitting journalism, designing million-dollar buildings, or taking on another equally exciting challenge. Answering phones and unjamming the photocopier? Not exactly on your to-do list. Unfortunately, for many recent grads with tons of ambition and minimal experience, “paying dues” is a disappointing fact of life. (I’ve been there, and a quick glance at savetheassistants.com confirms that I’m not the only one!) If your own office feels like a scene from The Devil Wears Prada, then take heart. With these tips, it’s only a matter of time before you’re moving up the ranks.

Network upward. One of the most frustrating things about starter jobs is being known as “Dawn’s assistant” instead of as your fabulous self. Having a higher-up who recognizes your potential and shows you how to maximize it can lessen the entry-level blues. Even if your boss isn’t the chummy type, you can probably find someone else in your company (or in your industry) who’s willing to go out for coffee or lunch occasionally to talk shop. They can also help plan your next steps when you’re ready to move on.

Really use your downtime. Later in your career you’ll wonder where the hours go as you rush from meeting to meeting and deadline to deadline. But for now, if you find yourself idly waiting for the phone to ring, you can work on the skills that could help you in the future. Teach yourself HTML, read up on foreign policy, or practice your editing skills on whatever written pieces you can find (but think twice before correcting your boss’ grammar).

Take initiative in surprising ways. If your boss is a micromanager, she may be reluctant to delegate. If she’s insecure, she might feel threatened by her bright young subordinate. First, volunteer for more responsibility, but if you don’t get it, find other ways to expand your role. Maybe one of your colleagues is overwhelmed by having to coordinate meeting spaces and you can create a better system for everyone. Perhaps you have a great idea for a marketing slogan that you can casually work into conversation with the director of that department.

Don’t wait for opportunities to come to you—go and find them. Look for opportunities in-house. If you’re a general admin, then you’re probably up on the company gossip, including who’s coming and going. I managed to break out of my role as a receptionist within a couple of months because someone left the public relations department at just the right time—and I knew they were out the door. I offered to help out the department while they searched for a replacement, which showed them I was motivated and more than capable of doing the PR job. Even if you feel you’ve outgrown your current role, many companies won’t hire you without a year or two of solid work history on your résumé (sorry). Internal promotions help you move up or try different skills without bouncing around to different companies, which some HR people see as a red flag.

Document successes. This is crucial to getting promoted or getting a new job. If you only wrote one press release but it generated media coverage, then make copies of the release and the news articles for yourself. If you reorganized your department’s filing system, then estimate how much time you saved or how many files you culled so that you’ll have something quantifiable for your résumé. Even small things can demonstrate your ability to follow through and your value to your company. And there’s nothing wrong with letting people know just how fabulous you really are.