How to Manage Up 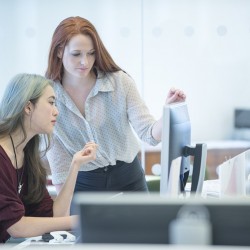 Your boss hired you so that she would have someone to boss around. And most of the time the system works just fine—she passes along duties and you complete them in record time. But despite the flow of your working relationship, there are times when the hierarchy must be disrupted. Let’s face it: In the modern workplace it’s sometimes necessary to boss your boss.
Half the battle is knowing when—and how—to do so. Here are some tips for taking control.

Get her alone. Never, ever boss your boss in front of other co-workers! (Duh.) Your boss will be embarrassed and you’ll look like an employee on a suicide mission. Both are bad consequences. Save your cajoling for one on one time with your supervisor in her office or in another “safe” space. Perhaps she is most relaxed at your post-meeting luncheon? This could be an appropriate moment to mention that it really is time to schedule the quarterly staff training that hasn’t been held for years.

Rely on reverse psychology. Bossing is most important when the future of the company depends on it. In contrast, bossing is not your best bet when your desire to dominate stems from any personal or emotional issues you might be having. For example, don’t freak out about a Friday deadline simply because you want to leave early that day to prep for your big weekend plans. Your boss will be unsympathetic to this clearly self-serving idea. Instead, tell her you’d like to have the big project wrapped up so that you can start a new one on Monday morning. Mention that in order to do that you’ll need approval on all those pesky files she’s been carrying around with her all week. She should be happy to relinquish the files (mission accomplished!) and your eagerness to work hard on behalf of your employer will be viewed as highly admirable.

Be gentle. You won’t win points if your boss believes you exist to sass her. Speak softly and carry a big stick (or a big latte). Make sure your delivery is light and that you always speak with respect. Make it clear that you aren’t trying to do her job for her, you’re just helping her do her job even better. Be so on your toes that she’ll have no choice but to follow your lead.

Emphasize your willingness to help. Sometimes even the best bosses need their minds refocused. Think about it: she also has a boss, plus employees and their issues to worry about. Her To-Do list is a page long before she even gets to the office. Even though she may, at times, act resistant to relinquishing a bit of the control in your relationship, ultimately she’ll thank you for keeping her on her toes. Remember the scene from Jerry Maguire where Tom Cruise tells Cuba Gooding Jr. “Help me help you”? I actually repeated this mantra to a boss. Over and over and over. Persistence is key.