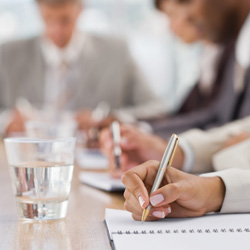 Have you ever heard a co-worker use terms that sound like code words out of a James Bond movie? Or maybe you tried—and failed—to decipher some of the jargon in a business plan? Well, WORKS put together a glossary of commonly used business terms so you can learn the lingo and move up the corporate ladder.

2. B2C: Business to consumer
Example: “Jocelyn preferred working on B2C accounts, because she liked interacting with customers and figuring out how to meet their needs.”

3. C-level: Corporate level
Example: “At 28, Katarina was the youngest employee promoted to the C-level, but her consistently high performance made her a natural for chief operating officer.”

4. COB: Close of business
Example: “Chloe scrambled to finish the new logo before COB on the East Coast.”

5. Deliverables: Tangible items produced as the result of completing a task
Example: “Once the research team completes their customer surveys, the graphic design department will get to work on the deliverables, including a new brochure.”

6. Deck: A PowerPoint slide presentation (not a deck of cards, as I thought the first time someone used this term)
Example: “Lauren’s deck showed that sales had improved dramatically during the third quarter, resulting in a hefty bonus for the whole sales department.”

7. Elevator pitch: Quick overview of a project or proposal; short enough that if you and the CEO are riding the same elevator, you can finish your spiel before she leaves
Example: “Anna practiced her elevator pitch until it was just under 45 seconds.”

8. Hard stop: Definitive end to a meeting (usually announced in advance)
Example: “The CFO announced a hard stop at 3 p.m. so he could make an evening flight to London.”

9. ROI: Return on investment
Example: “The ROI on the new data management system wasn’t as high as expected, so it was rumored that the program would get dropped.”

10. VC: Venture capital, which is funding for new businesses provided by outside investors
Example: “The new start-up was aggressively seeking VC, so they kept the offices spotless in case potential investors visited.”